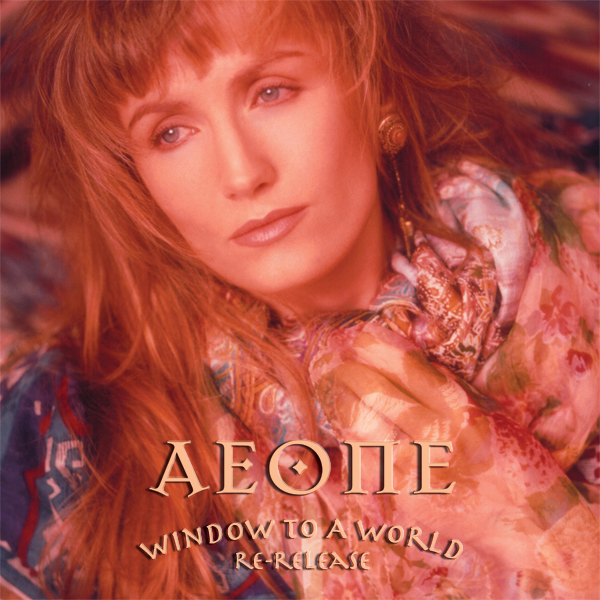 
Buy Direct from Palette Records and Save!
Normally $9.99

Buy Direct from Palette Records and Save!

Save When You Buy Two Digital Albums!

“Window To A World”

“Window to a World” is one of the first projects Aeone and Jeff Silverman worked on together. Although her sound has developed greatly since then, WTW was the seed of origin and creative impetus for much of that journey.

Welcome to Aeone’s “Window To A World” page!

We invite you to click on the tabs above to read more about the album, preview songs from the player above and scroll down the page to view the videos and read lyrics!

“Window to a World” had it first release in 1991 and it is a great pleasure to re-release it into the “world” again. It has been beautifully re-mastered by Jeff Silverman. Two new unheard songs have been added from the back catalogue to the line-up – “Color My Eyes” and “We Will Always Be Together.” To both these songs and to “Then We Dance,” we added steel guitar as a new element – which brings a unique flavor to the sound. “Then We Dance” was also remixed.

“Window To A World” had a limited release in 1991 through Rincon/Rhino records. Prior to this, there had been a tremendous amount of interest from different record labels whilst making the album. However, the market in the U.S. hadn’t opened itself to the big Celtic/Pop crossover that came with some now well known artists just after this. So the minds of those companies were very closed as to what to do with it, what category to place it under or what radio station to play it on, etc. The power was all in the hands of the record labels in terms of new artists and new sounds and there wasn’t a clear path – as there is now via the internet, iTunes, myspace, youtube, etc. for an independent artist to make their mark.

“Window” was the beginning of an important creative journey for me. As I look down the years from my current musical standpoint – I can see that even though my music has shifted, changed and evolved in many different ways – the seed was planted in this album and it is from this seed that my sound today grew.

I wanted to share this palace of origin with all those who experience and enjoy my music. In listening to it again all these years later, somehow the album still stands the test of time and is something to be proud of. Regardless of the era it was recorded in, what is still present, is an uplifting group of songs, a really unique creative energy, this sense of discovery and some really wonderful players and performances. This is what I wanted to share again.

This CD also marks the beginning of my long and fruitful collaboration with Jeff Silverman. He is the producer of this album and a comrade in the writing of it and my dear friend. Without a doubt, he is more potent with talent than almost anyone I have ever met. Jeff was also searching for something different musically himself – something he could feel passionate about. So it was somewhat of an artistic vehicle for him too and a new sound emerged through our creative alchemy.

Jeff was a successful songwriter and producer at that time and was signed to Stone Diamond – the Motown publishing label and so had quite a “groove” in him. However, he also had a strong “pop” sensibility and an understanding of bluegrass. These were all elements that he brought to the mix.

I have a deep affinity for old Celtic folk songs and music – these were the first things that I sang and played and the music that moved me most. Having just come to live in Los Angeles from England, I somehow felt these old musical roots more strongly. I felt this need to express something that was more authentic to my roots and at the same time bring it into “now.” I wanted to bring the essence of something traditional or ancient into a contemporary setting. I’m also interested in the magical, the ethereal, that place that we go to where all things are possible, where you can dream true and “Window” was the starting point of bringing those ideas into “sound” form.

Although you can pick out different flavors and styles in “Window To A World,” at the time, it wasn’t necessarily derivative. It was more of a merging of sounds and of styles. It might be hard to hear that all these years later, but in beginning of this body of work, there wasn’t anything out there that was an influence. So I would say there is a “sense” of “country” with the addition of steel guitar. “Face of Africa” began a journey of blending a “world” music feel into the music… There is also quite a universal pop feel – which isn’t necessarily as present in my later work… but, was a strong influence of that time.

“Window To A World” is a collection of heart stories. Long ago all news was brought through song by bards or minstrels who traveled from town to town – stories in song form were passed down in this way from generation to generation. This is how we remember and connect to the ancient part of ourselves.

Within all stories lies the opportunity to be transformed by allowing the sprit to be transported to another place, another time, where life takes on a different colour and texture, where magic is possible and we can dream true.

The heart stories of “Window To A World” take you to those places, if you wish to go. They are both old and new, both full of joy and with some sadness, some uplifting and some full of whimsy – but all come from a place of truth and were written and sung with great love.

Click Here to see the “Window To A World” cover design

Note From Aeone:
Thanks to all the amazing and gifted musicians who played and sang on this album. Whenever a new idea arose – the right person would appear to play and somehow their performance was imbued with this special energy that the project had and were true gifts.

The album is a combination of synths, sound design, programmed and live drums which create a bed of sound and blend into the organic feel coming from the live players. There is a strong Celtic overtone within the songs, but we’re using bluegrass fiddle and banjo in this pop format. We also used live bagpipes, pennywhistle, mandolin – some very organic and traditional percussion.

Special thanks to my family and my friends both in England and in the United States, for their great love and continued support. To Jeff Silverman, for your incredible talent, endless creativity and belief along the way.

Oh – then take me in your arms again
And lead me to the floor
And I will hold this heart of gold
To me forevermore …..

And the child that lies in every soul
Cries for freedom, young and old
So lift your spirit to the sky
And then we’ll dance
In the dance of life …

Well the winds of change have blown away
And i found me another time and place
Called home – my home
In this foreign land my spirit sang
And i held the future in my hand
Like gold – oh
But the memory of my fairest isle
Lies safe in my dreams
Like the mother of my soul
She’ll always wait there for me ….

Tous les nuits je reconnait
(every night i realize)
L’amour est dans mon coeur
(the love is in my heart)
je vois un soleil d’or sur la mer
(i see a golden sun upon the sea)
Et tous les jours je repete les mots & je suis sur
(and every day i repeat the words and i am sure)
Demain, je revien en angleterre
Tomorrow – i will return to england …

Oh, child of perfect grace a watchful eyes is keeping
Who’ll take your innocence
And leave your soul to weeping
Upon his lips a Judas kiss
That told you love held more than this …
Now in your simple heart
There is no understand
Where lies the truth
When fate must journey on …

The Face Of Africa

I want to believe that you’re near me
I’m calling your name – can you hear me?
I’m standing alone as the tears fill my eyes
And the rain’s falling down to the ground …
There’s so much to say but I can’t find the way
To bring us together …

Portrait Of A Dream

Well I once knew a traveler – a bohemian man
A wandering poet from a far distant land.
He told me the stories of kings and of queens
Of shimmering castles and clear emerald seas …
His words were like jewels – his voice liquid gold
So I promised him silver
For he spoke from the river that ran to his soul …

His words painted pictures that coloured my eyes
The sound was like music it ran through my mind
And the land of bohemia rose silent and clear
I knew in my heart, it had always been here
Oh mysterious minstrel – Oh magical man
You have shown me the treasure
And I hold the secret of life in my hand …

Love Is A Pure Heart

We are restless
Lost without a cause
We are soldiers searching for a war ..
Fight for glory knights of the brave
And the lonely heart inside will break
How many battles does it take
For a man to close his eyes and pray ….

Let’s the mists of time draw us closer
The truth is waiting there
And even if the shadows call us
Feel it in the air and everywhere ….

We Will Always Be Together

We will always be together with the piper and the drum, etc …